We live in a finite world. Ultimately, there is no way around production and consumption patterns that are sustainable. Ultimately, customers, engineers, managers and politicians will show a strict priority for the respect of nature and the environment.

To be sure, global competition for highest cost-benefit ratios leaves little breathing space for such long-term considerations. But at any moment in time it is legitimate to ask oneself if the time has come to now make sustainable production methods and ecologically benign products the priority for the company.

Many people in the business community believe that most of the environmental homework has been done leaving not much to do. This optimistic conviction is based on the inverted U-curve”. Countries typically start poor and clean. Then they industrialise and become rich and dirty. Once they are rich enough to afford costly pollution control, they finally become rich and clean. 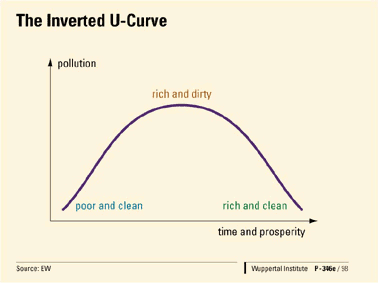 Fig. 1: Countries historically started poor and clean, then got industrialised and dirty and ended up rich and clean.

The trouble is that ”rich and clean” involves per capita consumption levels of depletable resources easily twenty times the rate of the ”poor and clean” stage. In the language of William Rees and Matthis Wackernagel (1992), lifestyles in the rich and clean countries involve ”ecological footprints” of some four hectares per person. Similarly, Friedrich Schmidt-Bleek has developed the concept of ”ecological rucksacks”. Every average Japanese causes an ecological rucksack every year of some 45 tons. Germans cause even heavier rucksacks weighing some 60 tons. Heaviest, of course, are the US American rucksacks of some 80 tons annually.

All in all, we are far from a harmonious situation. In fact the daily toll of environmental damages can be seen as absolutely alarming, as Fig. 2 is summarising. 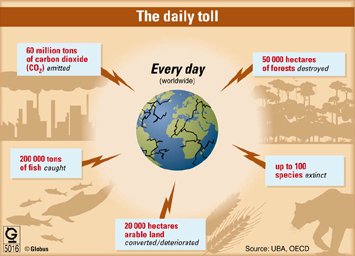 Among the most alarming effects of our footprints and of the rucksacks is the rapid loss of biodiversity. At present, we are losing some twenty, perhaps up to one hundred plant and animal species every day. This is mostly due to the destruction of natural habitats that have been the home to hundreds of thousands of biological species, some of them rather inconspicuous but nevertheless important in the interlocking webs of ecosystems. Habitat destruction mostly results from land conversion for mining, agricultural use, forest monoculture, or settlements. Even if much of the land degradation is taking place in the developing countries, it is often exports of timber, ores, fodder and fruits to the North that cause the degradation. In other words, we in the rich countries tend to export our ecological footprints to the South

One of the most disquieting aspects of environmental change is the greenhouse effect. The Intergovernmental Panel on Climate Change (IPCC) has published fears of global warming by up to 5 degrees during this century. (Fig. 3). 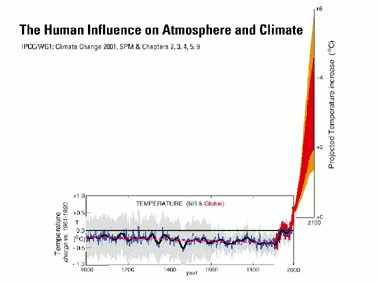 Global warming can be accompanied by a further rise of the sea levels. Fig. 4 shows how the coast lines of Italy reacted to different levels of the sea water table. 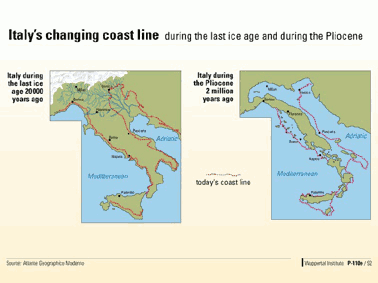 There is still a lot of ice on the Antarctic and on Greenland, enough to flood Holland, Bangladesh, Egypt, Florida and much of Germany.

We should by all means avoid such disasters. The IPCC has suggested that in order to stabilise carbon dioxide concentrations we should reduce carbon dioxide emissions by some 60 to 80 percent, say by 2050. On the other hand, we learn from the World Energy Council, that the demand for energy, and with it the emissions of carbon dioxide, are likely to rise steeply and are most likely to at least double within that period. So there is a gap as large as a factor of four which will have to be closed.

Let me conclude this introductory section by stating plainly that energy policies too are in a massive dilemma.

After the Industrial Revolution the Eco-Efficiency Revolution

The challenges of sustainability, of biodiversity protection and of climatic change look breathtaking. Fortunately, there is hope. Much of this hope is rooted in technological progress. But the task will be no smaller than the adventure of the Industrial Revolution. Having listened to some of the participants of this conference in advance, I am confident that the radiation curing industry can play a significant part in our new adventure of technological progress. However, I don’t claim the competence for giving you any special technological advice. Let me instead try and characterise the broader features of that new technological revolution.

In the early days of the Industrial Revolution, technology was mostly driven by the desire of economic expansion. The main emphasis was laid on the increase of labour productivity, which may have risen twenty fold during the last 150 years. This progress becomes visible in the speed of our vehicles, in the power of our machines, in the organisational miracles of industrial production lines and in the unprecedented skills of modern information technologies.

The emphasis on labour productivity was very reasonable until quite recently when human labour was indeed very inefficient and very hard too. The resources of nature seemed to be nearly unlimited. So the exploitation of nature seemed like a legitimate and natural part of the game for much of technological history.

Shifting emphasis to resource productivity should be the best answer also to the challenge of sustainable development. The World Business Council for Sustainable Development now speaks of Eco-Efficiency as a new guiding term. And the Wuppertal Institute of which I have been the founding president, gives ambitious goals for the increase of resource productivity. For the use of materials, my friend Friedrich Schmidt-Bleek calls for a decupling of resource productivity. But for energy, I suggest a more modest figure of a factor of four. At any rate, we are speaking of productivity jumps equally impressive as those characteristic of the Industrial Revolution. Let us therefore speak of the Eco-Efficiency Revolution, which we shall be forced to launch very soon.

The Eco-Efficiency Revolution is perhaps the only strategy allowing a reduction in size of the ecological footprints without jeopardising employment and competitiveness. 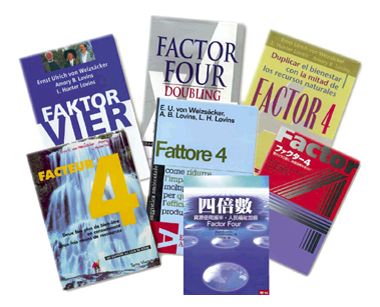 Fig. 5: Factor Four was translated into twelve languages including Chinese and Japanese.

My co-author Amory Lovins lives in and works at the “Rocky Mountain Institute”, some 2000 metres above sea level in a truly cold climate. And yet his home needs almost no external energy. It is easily a factor of four more energy efficient than ordinary alpine buildings. The next picture compares the two in terms of energy productivity. 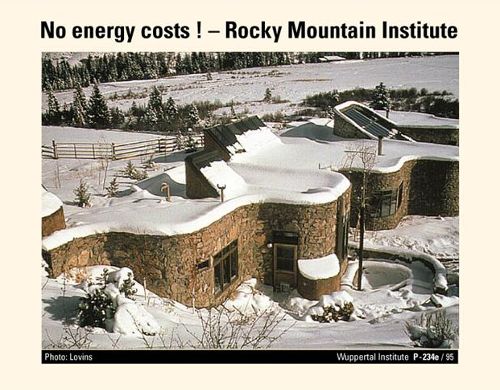 Another very attractive Factor Four example is what my co-author Amory Lovins has dubbed the hypercar {Fig 7}. By almost entirely redesigning cars, making them light-weight and still crash-resistant, and by using modern hybrid engines, the average fuel efficiency can be pushed up to 150 miles per gallon, which is more than four times better than today’s fleets. 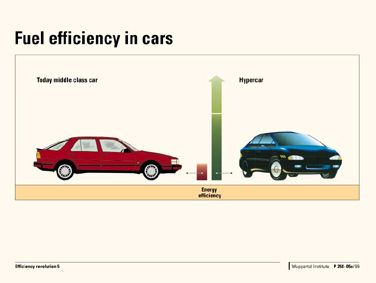 Also renewable sources of energy will play an important role in the efficiency revolution. They may not by themselves save energy but they are at least ”carbon-efficient” and lend themselves to being combined with efficiency technologies, e.g. the use of passive solar energy in buildings can be optimised by the so-called translucent insulation technique.

A different and very important sector of energy use is nutrition. By reducing the excessive use of fertilisers and the transportation of fodder, and by slightly cutting meat consumption, energy requirements for a healthy diet can be cut by a factor of four.

The twenty examples of revolutionising material productivity range from construction and durable office furniture, to water in homes, in paper manufacturing and to high tech recyclable plastics for wrapping and catering. One fine example is the replacement of a clumsy paper-based filing cabinet by a modern CD ROM system. There you save more than a factor of ten even if you generously include the ”ecological rucksacks” of the metal contained in the disks. One example is modern steel, which can be easily four times as resource efficient per unit of results obtained (Fig. 8) 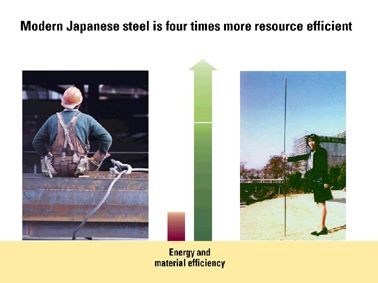 Fig. 8: Modern steel can be fabulously strong and can help saving 75% materials.

Let me present one last example from our book, the logistics of the production of strawberry yoghurt. Stefanie Böge has found out that for manufacturing a cup of strawberry yoghurt in Germany you would typically let lorries criss-cross central Europe and make 8000 kilometres, if suppliers and the suppliers of the suppliers are counted. It can easily be proven that you can do an equivalent job with only a thousand kilometres, which again is more than a factor of four. (Fig. 9) 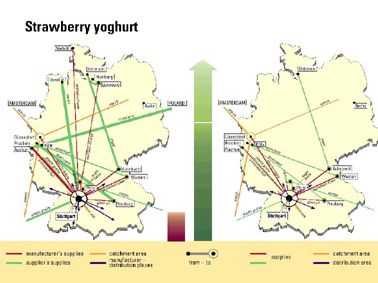 Fig. 9: The distance of total lorry traffic for the manufacture of strawberry yoghurt today (left) and in an energy efficient future (right).

I may have opened a window for you into a distant future of technologies and everyday habits of people, There will be millions of small transformations, some of them quite inconspicuous, that make up the factor four revolution. I am perfectly confident that the revolution will be as benign as the industrial revolution, although surely there will be losers, chiefly among those who do not want or cannot keep pace. That, however, is not exactly new in the history of industry.

Needless to say much of the efficiency revolution is not going to happen unless the framework for doing business is changed. Efficiency must be made profitable. Fortunately, some eco-efficiency is profitable now. (Fig. 10). 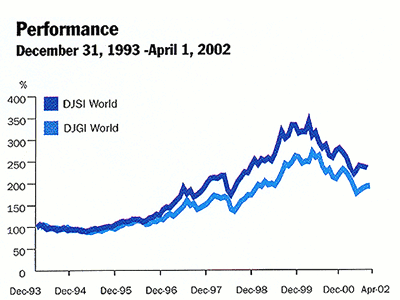 Fig. 10: A portfolio of stocks of ecological “best in class” companies had a better performance than the DJGI

A portfolio of stocks of ecological “best in class” companies had a better performance than the Dow Jones Group Index. Companies paying attention to the resource and energy flows going through the firm, tend to gain internal transparency and to enjoy better staff motivation and better customer relations. This is perhaps the most convincing explanation for their encouraging stock exchange performance.

It is to be feared, however, that the potential for making profits by eco-efficiency measures will be very limited if the present world market conditions prevail. Energy and natural resources are still too cheap because markets are rather blind with regard to long term scarcities and to such developments as the greenhouse effect.

Moreover, conventional policies in most countries have even subsidised the use of natural resources. André de Moor (de Moor and Calamai, 1997) has estimated that some 700 billion dollars are spent annually in subventions given to the four fields of energy consumption, water, agriculture and motor transport. This does not even account for all the tax advantages, free infrastructure and land given to investors. De-subsidising resource use will be an important part of ecological policy worldwide.

Another and related policy tool is ecological tax reform. In a world of growing unemployment and of scarce natural resources it just doesn’t make sense to draw the biggest part of fiscal revenues from human labour while resource use is essentially free of charges. The German government has made some first steps in that direction, as have many other European countries. Perhaps certain details were not well designed so that the programme is not exactly popular.

The EU is now introducing an international trade regime for permits of carbon dioxide emissions. Economists believe that this instrument can be more cost-effective than ecological tax reform.

This is just the beginning. I remain confident that future generations will find it easy to accept market interventions making scare resources dearer and abundant resources cheaper. That is pure economic rationality and should make countries richer, not poorer.

I hope that your innovative branch of industry with it’s fascinating advances in UV/EB and radiation curing will be part of the driving force for a more prosperous and more sustainable society world-wide!