An internationally recognized environmental scientist and statesman has been appointed dean of the Donald Bren School of Environmental Science and Management at the University of California, Santa Barbara. 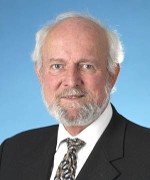 Ernst Ulrich von Weizsäcker, a former professor of interdisciplinary biology who was the founding president of the University of Kassel in Germany, is about to conclude two terms as a member of the German Parliament, or Bundestag, where he has served as chair of its committee on the environment. He will take up his new duties at UC Santa Barbara in January 2006.

Von Weizsäcker has served as policy director at the United Nations Centre for Science and Technology for Development, director of the Institute for European Environmental Policy, and president of the Wuppertal Institute for Climate, Environment, and Energy. He is a member of the Club of Rome, a global think tank devoted to the improvement of society, and served on the World Commission on the Social Dimensions of Globalization.

In addition, he is the author of several influential books on the environment, including “Earth Politics” and “Factor Four–Doubling Wealth, Halving Resource Use.” His many honors and awards include the prestigious Takeda World Environment Award and the Duke of Edinburgh Gold Medal of the World Wildlife Fund International. A graduate of Hamburg University, he earned his Ph.D. at Freiburg University.

“Dr. von Weizsäcker is a distinguished scientist and eminent scholar who will bring both visionary leadership and new dimensions to the strong scholarly resources of our Bren School,” said UCSB Chancellor Henry T. Yang. “Environmental science, management, and policy are the three pillars of the Bren School, and Dr. von Weizsäcker is extremely well qualified to lead our efforts to integrate these elements as we develop innovative solutions for environmental challenges facing California and our nation.”

Chancellor Yang also noted how von Weizsäcker had developed a global network of key individuals and organizations in environmental science and management with whom he has collaborated, and said this would be of enormous value and benefit to the Bren School.

In addition to educating highly qualified research scientists and environmental management professionals, the Bren School’s mission is to play a leading role in researching environmental issues and in identifying, preventing, and solving environmental problems of the 21st century.

UCSB Executive Vice Chancellor Gene Lucas said von Weizsäcker will bring to the Bren School “a very special background in both academe and government as well as a global perspective on environmental issues. This will greatly enhance the reputation of a school that has quickly grown to national preeminence and is now viewed by many institutions as a model for interdisciplinary teaching and research in a field of increasing importance and impact.”

Commenting on his appointment, von Weizsäcker said he was looking forward to working “ at this unique place and helping to explore new opportunities for environmental science and management. The tragedies experienced in New Orleans show the urgent need to work on climate change and on measures that may help attenuate its consequences.”

Noting how he had been “highly impressed” by the faculty of the Bren School, von Weizsäcker said he was excited about joining “this first-class team of scientists and educators.” He also said that he was “very optimistic about the professional career prospects of Bren School graduates.”

The chair of the search committee for the new dean, John Melack, a professor of ecology, evolution and marine biology at UCSB and acting dean of the Bren School, said his committee and the school’s faculty saw in von Weizsäcker an opportunity to expand both the vision and the reach of the Bren School. “He engaged the faculty and really made us think differently,” Melack said. “He stretched people’s sense of how to view the world. The faculty strongly feels that he will add a new intellectual dimension to the Bren School.”